That’s ok. I usually like to take the lady friends to a nice show after the abortion. We’ll just have to go somewhere else.

And not about anything controversial, just rape… 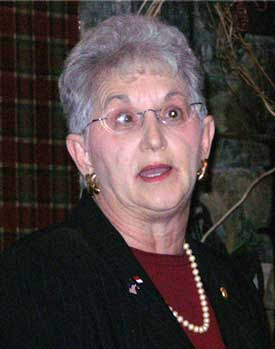 And by F***, I mean Foxx, as in North Carolina’s own Virginia Foxx. Foxx is perhaps best-known as the batshit crazy-like-a-fox representative who said that Matthew Shephard’s murder having been a hate crime was a hoax, and that the health care bill was more reason for fear than any terrorist threat.

Most of the things that have been done by the federal government which are unconstitutional have been done for good reasons. They’re not malevolent reasons, but they’re wrong. We should not be funding education, for example.

Well, Rep. Foxx is the new chairperson of the house subcommittee on higher-education.

She was the only committee member to vote against the Higher Education Opportunity Act of 2008 that was signed by President George W. Bush.

She is also a huge supporter of for-profit colleges and thinks that recent student loan reform should be repealed.

Ah, there are so many things I could mention that are flat-out rotten about what the new GOP-led House plans. But Foxx is one of my favorite targets, since my f***ed state keeps sending her to Washington.

I used to feel more comfortable blogging opinions that weren’t well-fleshed out. Why do I need to be right? This blog exists for me to write merely what I’m thinking at a given point in time. If I turn out to be wrong, I’ll readily admit it. And if I don’t, it’s probably because I don’t care enough and I don’t have enough readers to feel any obligation to follow u.

So, I have a confession. I think I like this Chris Christie fellow who is the Republican governor of New Jersey. Sure, I don’t agree with politically on very much at all. However, whenever I see him featured in a news story, I understand his arguments, and I get the sense that he’s sincerely concerned with being an honest, effective governor. I don’t follow N.J. politics, but politicians don’t become popular by appealing to the most knowledgeable voters. If I like him from four states away, he’s probably doing something right.

I found this July quote from Peggy Noonan:

Christie has gotten “closer than most national Republicans have come—or Democrats will come—to satisfying the public desire that someone step forward, define the problem, apply common sense, devise a way through, do what’s needed. He’s going to break through in a big way. The answer to our political problems lies in clarity, competence, and courage, not a visit to crazy town.

This actually sounds a lot like Barack Obama, if Obama were not constantly afraid of shooting from the hip and telling people unpleasant trutsh. If Obama were a liberal Chris Christie, his approval rating would be 70%.

I certainly have my political ideology. I’m still pretty far left. Ideally, I want politicians who represent this ideology in office. But I might take a blunt, sensible, moderate Republican over a timid, conforming moderate Democrat. Might. We don’t have any of those Republicans in North Carolina, so this really hasn’t been an issue.

Feel free to go on and tell me why Chris Christie is awful. This is just an observation I’m making from four states away.

Meanwhile, I am trying to get motivated to support Elaine Marshall for Senate in North Carolina. I really am. But I’m pissed right now. I can’t help but think that Democrats would be doing so much better nationally if they just had some candidates who were more like this:

(As I typed that last sentence, I realized that Democrats have Alan Grayson in Florida, and he’s likely to lose his seat, but that may be because he called his Baptist opponent “Taliban Dan”. I think it’s funny, but most of the folks in conservative Orlando probably don’t).

After multiple Republicans filibusters, the Democrats finally passed an extension of unemployment benefits, even though it was supposed to be a “jobs bill” (see Ezra Klein) and had been heavily watered down just to get the 60 votes to break the filibuster. This fall, Republicans will ask, “Where are the jobs?” and all the Democrats can say is, “Well, it would be worse if we had done nothing, and we would’ve done more if you guys didn’t get in the way.”

So people are supposedly going to enthusiastically vote for Republicans in November, but on what premise? More tax cuts? Tax cuts were the legacy of George W. Bush. Shall we just try that again?

Tax Cuts vs. Stimulus
This is from conservative financial type folks:

But they’ve a least got the country pointed in the right direction, if not headed there. I don’t see how putting Republicans back in power can possibly help.

Many in the GOP are distancing themselves from Congressman Joe Barton for his apology to BP, but Barton will be the chairman of the Energy and Commerce Committee if the Republicans take back the house.

The administration, they were hands off. They didn’t do anything. Where were the boats that could have been commandeered by the government to be sent into this region to deal with that oil plume as it was coming up in the water and destroying marine life? Nowhere to be found. Why? The administration was hands off on this policy.
(6/1/2010)

Michelle Bachmann advocates the government taking over public property. This is a tad at odds with her previously-stated positions on government response to crises.

Bachmann advocates against the government having a role in regulating health care insurance and rescuing the crippled economy.

Enough government growth and bureaucracy. By spending hundreds of billions on a failed economic “stimulus” package that has allowed our unemployment rate to rise to 10%.
(5/2/2010)

Bachmann accuses the stimulus package of having failed and of having caused greater unemployment. Perhaps the best-known economic research firms are IHS Global Insight, Macroeconomic Advisers and Moody’s Economy.com. They all estimate that the bill has added 1.6 million to 1.8 million jobs so far and that its ultimate impact will be roughly 2.5 million jobs. The Congressional Budget Office, an independent agency, considers these estimates to be conservative.

Similarly, the unemployment would be up to 1.5 percentage points higher in the absence of the stimulus, according to the non-partisan CBO.

Let’s remember really what this is. This has a lot in common with Italy in the 1930s and they way Italy dealt with economics. It still continues private ownership of business but government is in control.

So government control of the private business, while it’s private ownership, that’s still at the end of the day the federal government virtually having a say over private business. We lose freedoms; we lose economic competitiveness.
(5/13/2010)

And I’m not going for the easy one, who is Rep. Souder, the pro-abstinence, family-values-spewing congressman who just resigned for having an affair with his aide.

I saw this quote from Rep. John Mica of Florida:

I’m not going to point fingers at BP, the private industry, when it’s government’s responsibility to set the standards.

Suddenly, the Republican wants government to get involved in regulating industry? You’re shi**ing me.

I’m awfully curious to learn what Rep. Mica has previously said about the government getting involved in regulating industry.

Let’s see…He derided the healthcare bill, mostly because government is going to play more of a role in ensuring its availability to more people. He was outraged about the government taking over the processing of student loans. He opposes the Federal Reserve having greater regulatory powers over financial institutions. He complains that too much financial regulation is confusing.

To be fair, I don’t know much of anything about Rep. Mica. Tomorrow, I will not care. My quick late-night analysis is probably faulty. But, wow, does it make me furious when I see this hypocrisy.

Percentages of Republicans who, according to a new Harris Poll, believe:

How do we have civilized political discourse in America when a fourth of one of the two major political parties believes that the President might be the Antichrist? Furthermore, why does the President even engage with this political party that is unwilling to debate policy but unapologetic about encouraging this insanity?

I need to find a bubble away from all of this.

Sen. Jon Kyl of Arizona, the Republican whip, argued that unemployment benefits dissuade people from job-hunting “because people are being paid even though they’re not working.”
Huffington Post / 3.1.2010

This is the Republican Party. This is what most Republicans believe. I disagree. I don’t respectfully disagree. I find the mindset and policies of the GOP to be abhorrent. Thoroughly.

Don’t tell me the parties are the same, controlled by the corporations, etc. The Democratic Party is seriously flawed, but Republicans truly delight in shitting on people who need help.

I’m not sorry for saying this.

I’m off to dialysis now. If I could no longer work because of my kidney failure, Republicans would call me a maggot and a leech for relying on Medicare. F*** them.