I have planned every day for the past couple of weeks to take a few minutes to post a real blog update. It never happens. I’ll rattle off some reasons. Work remains intense. I’m not completely comfortable describing in any detail just how intense this work is. I don’t have much interest in blogging if I feel an impediment towards raw expression. I feel I’m not being authentic to write narrowly and ignore other, more significant topics.

Blunt truths. I’m exhausted. I have been exhausted. When is the appropriate time to declare a time-out for self-care while you’re in the middle of a twelve-week, once-in-lifetime quest that will dramatically shape the remaining trajectory of your life? But if you don’t sleep, you…[this, that, and that]…Your health comes first!…[What’s another one, Dave? C’mon ,you’ve heard it all from all parties concerned?]

It’s getting late…now 1:31…I’m over-thinking…what I wanted to get to was what you see in the photo. Pet loss. Pet loss amidst…and I spent five minutes trying to find the right word for the subject and decided I needed to move on. Pet loss amidst…this…

It’s been over two weeks since the longest domestic relationship of my adult life ended. That’s one way to put it, with “it” being my cat dying. I have not had a chance to let the death of my nearly 17-year-old cat Zellouisa sink it. What is going on here that I can’t even take time to mourn? The little box with her ashes sat at the vet’s office for eleven days. I didn’t have time to pick it up.

After I adopted Herman in 2006, I knew I had three aging pets that might very likely die within a short time of each other. Given where I was 4-5 years ago, I had a deep fear of how I would move forward if I were to lose them all, for the most part, at once. Because, in the darkest times, the pets have been all I’ve felt I’ve had. I’ve had a pet since the summer of 1996. That was not a fine summer, but having Aremid helped. Both the cats, Aremid and Zellouisa, were with me through lots of moves and job changes and life events and illnesses. 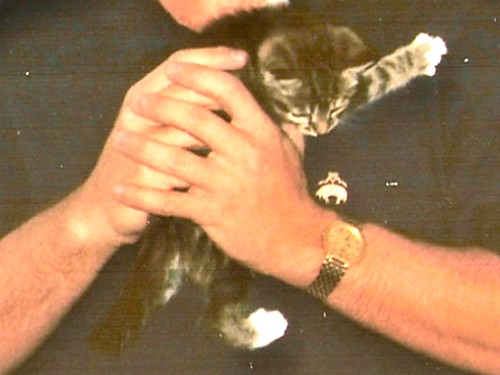 And now, for the first time in 18 years, I have no cat. All of my original pets are gone. Somehow, I managed to go 16 years without losing a pet. But Aremid died in June 2012. Then, the “new” cat Mr. Featherbottom died abruptly in May 2013. Then, I lost Herman in February. And, then, Zellouisa, five months later. Four pets in two years. 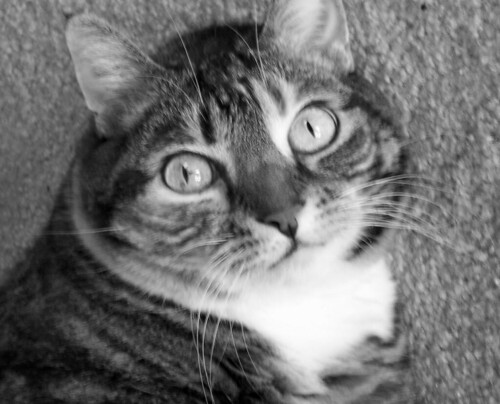 I brought home Zellouisa as an itty bitty kitty back on October 1, 1997, after a co-worker who lived in Eden asked if I wanted another cat. Today, for the first time in 18 years, I don’t have any kitties. I had to put Zellouisa to sleep today, after she apparently suffered a torn achilles tendon a few days ago, probably brought on by the general weakening that comes with being 17-year-old cat with various diagnosed and undiagnosed medical conditions. I’m afraid she was in quite a lot of pain these past couple of days. Sweety Z. Weezie Weeze. I know she really enjoyed being the only kitty over the past year. I thought she was doing ok. But things happen. This is tough. I’m sure I’ll have more to say soon enough, or, at the very least, I’ll probably start a post-a-thon of the Best of Z, in photos. Goodbye, sweet girl.

I finally used my credit for five 16×20 canvas prints from mypix2canvas.com which operates locally out of Apex. I had already had one previous canvas of Herman and Aremid together. I spent awhile trying to figure out how I’d arrange these six prints. Two rows of three is what I had planned for months. Ultimately, I realized that one just didn’t fit.

So these five are together:

And Mr. F gets his own corner:

Zellouisa deserves a blog post, too. Taken three days ago. This is going to be one of my all-time favorite photos of her.

And now back to pets. Shot back in August. Nothing spectacularly entertaining. Just one of those simple pet moments I was inspired to capture.

I have some better photos from the good camera, but those could take years for me to look at.

From the last couple of days…

Mr. F looks splendid against the backdrop of a kitchen rug

Z spends a lot of time on the bed seemingly out of it. So I was happy when she crawled up on top of me for some face time.

Aremid used to play the role of healer, lying next to me or on me in bed while I recuperated from some malady. Z has been doing that a bit.

Herman spends a lot of time on the couch seemingly out of it. He perks up for walks and when I come home, though I haven’t been out much of late.

I’ve been spending some time organizing my Flickr photos, as I’m committed to Flickr as a photo repository for the foreseeable future. I don’t get terribly worked up over privacy issues, but the recent brouhaha over Instagram’s privacy policy did cause me to ponder whether I really need the service as an option for photo-sharing. I’ve only taken a few dozen Instagram photos. Occasionally, a filter adds something. Ok, I admit, sometimes a filter adds a lot because the original is bland.

But I share photos I want to share via Facebook and my blog, and it’s instant enough. I feel constrained by the square format. I’m not part of an Instagram social network. I don’t need to make a statement by killing my account, but I did just use Instarchive to grab my Instagram photos so I can get them up to Flickr. I have probably posted many of these on the blog already. But, as I have time to kill, and I hate when I spend time to create a meaningful image and then never share it, I shall post a top of my 2012 Instagram photos. I will stick this post in the photography category even though I recognize how many would sneer at that association.

Z on her back

Of the tens of thousands of dollars in home improvements that I NEED, near the bottom of the list was a storm door for the front. I would survive without one. It was while I was knocking on doors for Obama last month (yeah, I did this; a story I probably will not get around to telling), that I became especially self-conscious about my lack of a storm door. It seems to be a fixture for all bungalows in old Durham neighbors. Not all. But when you have a very old house, it seems to be the norm.

So I got one. The photos do not reflect the final state. I had the guy who had initially installed it a couple of weeks ago come back last week to put some trim to fix up the look. Since my old frankenhouse has all sorts of lines and spaces askew, there were spaces to fill and extra borders to add. I haven’t gotten around to taking after-after pictures. He also repaired that long-standing hole in my porch. The porch could use replacing, but that’s for another day. Before I got the door, I also ripped off the ugly vinyl/aluminum cover (I’m confused as to which it is) around the door-frame. I’ve still got that stuff around the pillars and windows, but this is a start.

The best part of the storm door is having a huge window in the living room, since the windows in my house are small. It’s far more pleasant now to be able to see more of the outside. Almost as important, the pets have a new window. I wish Aremid could’ve seen this.

Let me do that experiment, where I take out of fancy leather-bound volume and just start writing for writing’s sake. If one is to ever write to make a living or a tenth of a living, one should be writing constantly about everything whenever one feels the whim of an idea coming on. Or, at least, there were these five guidelines to writing that AR had posted on her FB profile espousing what writers should do. So…here goes…

Disclaimer…I’m on Ambien and probably will be for the foreseeable future if I undertake this exercise regularly. I need it to sleep. But I’ll spell poorly, and I won’t remember what I’ve written in the morning.

But I need that, in addition to my CPAP machine, which I just wrote about, but that text has gone missing. Do I have to write about the damn CPAP machine again? I try. Since early July, I’ve tried. Between induction, bad basks, nasal congestion, a lengthy period of shingles, and more nasal congestion, I’ve had a lot of impediments to getting CPAP to work for me. The goal is to get at least 4.0 hours of CPAP sleep, during which you get negligible apnea events. But I have so many failures that my average is about 3.2 If I include nights when I do feel I can fall asleep comfortably-enough with the mask, I may average. Inevitably, I tear off the mask in the middle of the night. So my “compliance” rating is far below the 70% they’re looking I’m around 30% compliant. I’m told insurance could stop paying if I’m not doing well enough on the machine.

But I’ve got bigger words than death from sleep apnea.

Depression and stress and immunosupression drugs all put me at significant risks for heart attack, stroke, diabetes, cancer, etc.

Getting enough sleep isn’t happening.
Exercising isn’t happening. I think the Y is double-billing me for services I’m not using.
Diet isn’t happening. My cutting down on traditional fast food chains is symbolic only for now. All I can eat Whole Foods hot bar isn’t really much healthier..

Quick…other topics…
Zellouisa is top cat, and I hope she’s not losing too much weight due to the presence of Mr. Featherbottom. Mr. F. has put his stamp on the household as the aloof, food-centric kitty that is the mark of 99% of all house cats. I just haven’t had one of his ilk before. I will feed him and clear his waste, and he won’t do a whole lot for me. That seems to be the deal. Oh, well.

I am so desperate to be doing something else with my life. This sentiment is celebrating its 23th anniversary. Where I should I have the party?

I forgot to observe Zellouisa’s 15th birthday back on September 1. Sadly, it was her only birthday as the only cat. She does remain top-cat, however. For what it’s worth, the new one is clearly not suited for top-cat duties. So let’s hope he does not need to fill that role anytime soon.