With apologies to the other decisions I’ve made.

(Couple wanted to watch Moksha while I did some shopping this morning.)

I don’t want any design critiques. It’s not finished yet. Demo Day is Friday. But I’ve got to say for the record that I’ve never worked so hard on anything. And 70% of my time has been spent on Javascript code, things like figuring out how to get dates to save to Parse and arrays to render directly to the page without loops but just a simple space after commas…and promises to deal with asynchronous events…I didn’t really get the latter working as I’d like. Keep mind I’m just team of one, so I’ve been dealing with:

So…not quite done yet. But I need to at least put myself to bed. Moksha has already gone to bed.

Low: There is quite a lengthy, complicated story behind this, but over the course of July 2014, I had no health insurance, for the first time in my life. This was disastrous on so many levels.

High: I created an app that shows all the most recent vines of my dog on one page. There’s probably a page on Vine’s site that does exactly the same thing, but this one was built with Backbone, which I kinda know how to use.

Blog another picture five minutes later, because you are not ashamed of your dogs’ lady parts and like this new picture and are too lazy to swap out the picture in the last post. Or just don’t care that it’s essentiality a duplicate post.

Moksha and I just had a traumatic visit to the Northgate Dog Park, where a seemingly lazy, gentle dog went berserk, yet again. While I mentioned the dog and owner’s name on Facebook (private to the default local list only), I’m not going to shame the guy publicly. This guy lords over the dog park. He seems to be there 24/7 and has been coming for years. He said bluntly that it’s “the natural order of things” if one dog drives all the others away. Furthermore, it’s the understood rule of the park that whoever arrives first stays if there is an altercation. He sits at the picnic bench and watches from 100 feet away while his dog suddenly tears into another one. He’s one of those dogs that lounges around 90% of the time, and everyone loves him, but when he gets into the mix… Everyone went over to the small dog side.

I called the sheriff and had them send someone down there, just to embarrass the guy a little if that’s even possible. No one has completely loudly enough over the years apparently, so he’s not going anywhere. I can’t imagine going back there as long as this pair are there. It’s quite sad. Moksha has a lot of fun there. I don’t see any visible signs of injury yet, but such things usually don’t become apparent until later. 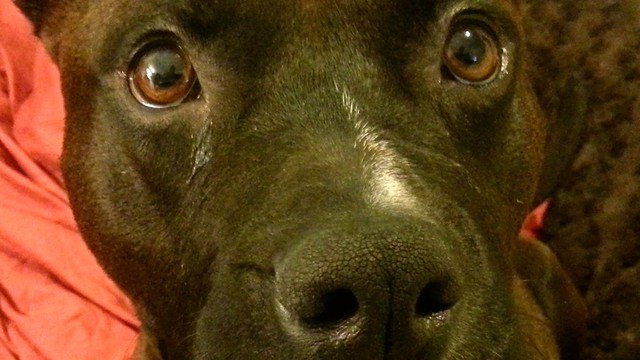 What good is a blog if I’m not blogging about my new dog? And I haven’t been. It’s all been going on Facebook.

Anyway, let’s skip ahead. Naming her. No one seems to appreciate what a deeply personal decision this is. I’ve been making light of this problem on Facebook. I’m not shutting down people who have been offering suggestions, even though there is almost no chance I will use any of them.

Perhaps it’s been good that every name I’ve intended to use has been vetoed by someone. On one hand, I shouldn’t care when anyone else thinks. On the other hand, a day of reflection has been causing me to the veto every name.

“She doesn’t understand that that’s her name, anyway.”

“You’re not really gonna call her that.” 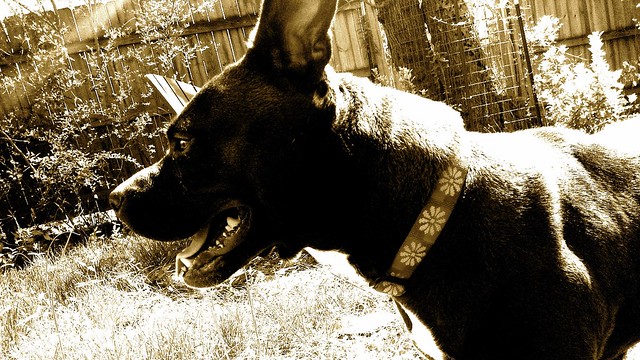 Ok, enough. Thanks for the support. I’m going to name her something that everyone thinks is utterly ridiculous. (Utterly…haha, I made a pun, since she is pretty udderly.) And you’re not going to like it. And I’m going to be amused with myself.

Aremid was named after a soap opera place/storyline. The story behind it is silly, but I can’t imagine having named him anything else.

Zellouisa was named after one day of brainstorming, eventually the merging of a few names I liked, forming something that no one else has ever come up with, and I’ve been happy with that, and I can’t imagine calling her anything else.

Herman was named after my grandfather, and the name fit from day one, and I barely ever gave it a second thought.

Mr. Featherbottom was named after an Arrested Development character’s alter ego. Sadly, he didn’t live long enough for his name to become legendary. While I might have abbreviated his name as “Mr. F” in speaking and writing of him, and I did actually call him by his full name to his face, and I’ve done with Zellouisa for 16 1/2 years, even though his name was six syllables.

But I think naming dogs is different from naming cats. Only people I know will ask what the cats’ names are, while many strangers will see the dog outside of my house and ask about his name. So I really need to make it something that I don’t have to pronounce twice.

Except that I don’t. That’s the rationale I gave when I just threw out a name I went so far as to create a tag for. But I also decided it was a lousy name.

This naming exercise has been draining, mostly because it reminds me of how little there is of interest that defines me. Before you try to correct me, let me explain. I haven’t traveled enough to have many places that inspire me. I haven’t read enough books to have had characters that stand out. I can’t even think of TV shows that I adore so much that I want to use a name from one of them. (Ok, not entirely true. I’ve gone through a bunch of TV-inspired names. Many. But I haven’t stuck with any of them). Movies? I haven’t seen enough movies, really, to have a great movies to pull from.

I’ve gone through many, many common names, and many variations of common names, and I’ve explored Google Translate and nameberry.com for hours upon hours. I’ve come up with a lot of good names, I think, but, in the end, I decide they don’t really resonate, and I don’t want to use a random name.

The naming exercise also reminds me how few people “get me.” This is not a criticism of anyone. It’s a criticism of myself. But those who know me best know I’m going to come up with something out of left field, no matter what they suggest.

I think naming a cat after a soap opera plot is fine, and I don’t mind that people I know I used to watch Days of Our Lives religiously.

I think it’s fine that I invented a name that sounds funny and, perhaps, is ludicrous.

I think it’s fine that I named a dog after a close relative.

I think it’s fine that I named a cat something completely ridiculous.

I’m going to have a finite number of pets in my life. I’m not naming animals at the shelter. She’s already my best friend. 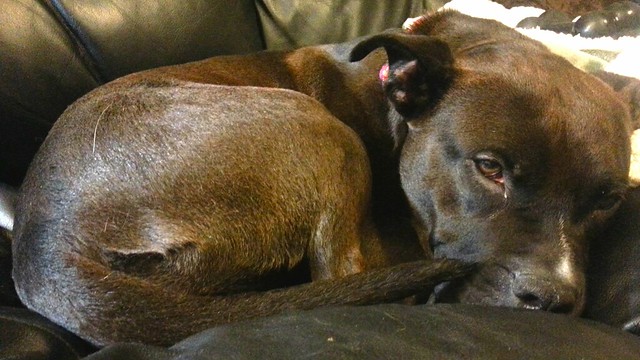 But it’s been two weeks now. Puppy class starts on Monday (she’s four, but all ages are welcome), so that’s a pretty hard deadline.

Grief need not take form like this. No need to crumble or sob. No need to cry out, “I want my puppy back.” No need to become a puddle of grief. No need to feel time stopping and devastation consuming you. It seems abnormal not to experience grief like this. I haven’t been writing about just how I have been grieving the loss of my dog. I’m not going to write about how it has been.

But I did just briefly describe how it is right now. 40 days later, I’m suddenly overcome by a tsunami.

I miss my boy so much.

I suppose I can’t just blog about Herman having pneumonia without a follow-up. No time to blog. He’s been recovering. Been on meds. Coughing less and less. Has lost weight because he wasn’t eating much, and I wasn’t feeding him much. He’ll probably be weaker overall from now on, mostly because he’s 13, and he’s got all these other things wrong. And less physical activity (very short walks). But no vomiting or seizures. Just tired, probably partially due in part to the increased painkillers he’s been on since right before the pneumonia. He looks like he’s on his deathbed most of the time, but “deathbed” has also been his default facial expression since I got him 7 years ago. He is definitely weary. But he’s capable of perking up. I think his quality of life is still reasonable.

Herman’s staying in the hospital overnight. Aspiration pneumonia. Pneumonia probably caused by combination of yesterday’s vomiting and summer’s laryngeal tie-back surgery. I know it sounds like the time you think about making that decision. It is. But, for now, the hospital stay may help him get through this, and he may still have some decent quality of life left.