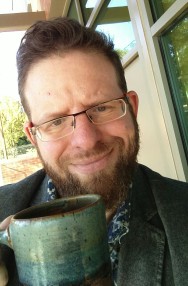 2:41PM Why is nobody at the Durham Coop Market? On a wondrous fall day, I am one of only two people sitting outside in the the spacious seating area off Chapel Hill St. I bet Cocoa Cinnamon is packed. I bet Weaver Street Market is packed. (Or perhaps not. It’s only 55 degrees outside, which may be too chilly for most, although, for me, this is perfect!) Your loss, my gain, because I don’t need the crowds.

I need to get out of my house to do “work”. My house is too impossibly cluttered and devoid of natural light and air circulation to remain there, even with a seemingly infinite list of to-do’s that are dependent on being home.

But where the heck to go in the Great Awesome Cool Dirty City of Durham? For what one ridiculous study called the country’s most caffeinated city (from a clock app maker?), there is certainly a dearth of coffee shops, particularly on a Sunday afternoon.

I sought to find an option other than my usual on Broad Street. I headed downtown. I thought I’d go to that nifty little place by Brightleaf off Duke Street, but it’s closed on Sundays. Coffee shop closed on Sundays? C’mon. Fine, I’ll go to that upscale grocery place by Brightleaf where half of Trinity Park is probably brunching. (The other half is at the artisan bakery cafe 0n Chapel Hill Blvd, and I realize my math is off, since I can name four or five places where half of Trinity Park is currently brunching. And I’m intentionally not naming establishments, other than Cocoa Cinnamon, because you are annoyingly too crowded, though your beverage and food offerings do warrant the trip). Oh, so before my parenthetical aside…

After my “before my parenthetical aside”, the population of the outdoor seating area spiked. A friend of mine happened to come by, along with the friend of the friend. And the friend remarked to the friend that my blog was worth reading, and I was a great writer, and I was quite embarrassed, because, really?

Reread that last sentence. That is not quality writing. Can I really write about anything, and it would be great? Am I really so bad at accepting a compliment?

I’m not sure where this post was going before the welcome interruption. I was going to expound a bit on the lack of coffee shop/sit-and-work options around Durham. And I was going to declare that I must frequent the Coop much more often. It’s like Whole Foods without the “excuse-me’s” every 5 seconds. (I really don’t have many complaints about my local Whole Foods.)

That’s all I can muster for this afternoon. One day, this blog will get back on track. But that day will not be today. 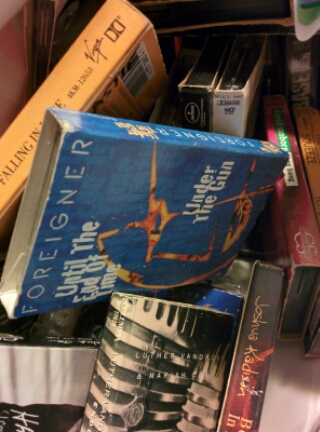 I can’t bring myself to toss them. And this is quite a random blog post considering I’ve posted nothing for two months.

Today I had I’ve had two disturbing internet experiences, by which, I mean, I came upon two stories that paralyzed me. By which, I mean, I had powerful emotional reactions to them and desperately wanted to take action, but I couldn’t do anything. I could easily state what the gists of those stories are, but that would be besides the point I’m getting at.

General gists. In one case, a satirical website managed to offend my sensibilities for perhaps the first time. I found its post sickeningly disturbing. They cross the bounds of good taste all the time, and I usually an quite entertained. Not this time. I was going to post a comment but saw that those who found the post amusing were a despicable lot. I couldn’t bring myself to wade into the muck, but I stared at the muck for far too long.

In the other case, a friend posted a link to a commentary that was sickeningly disturbing, in both its content and because it was so spot-on. To me, this was eye-opening and the epitome of the type of content you might feel compelled to share because you’re sure a lot of people haven’t thought about it. But I did nothing other than sit ostracized for 15 minutes. I think I felt ashamed knowing that I’d simply be sharing a link and doing nothing else. I’m great at expressing outrage but doing nothing to make the world a better place.

The point is, I’m hypersensitive to everything going on around me, I think it would be useful to give voice to at least a small percentage of the feelings that stir and spin and careen out of control, but I don’t do it.

They’re fosters from IAR. Friday and Sabrina. And they needed to go together. And now I’ve got cats again. I’m sure this won’t be the last post on this topic.

[Wednesday, early AM] Trying to write about my Iron Yard final project at 2:42am from bed using Android voice recognition for the bulk of my transcription of thoughts is not a recipe for a sterling blog post. But I lack the time to write something adequate.

No matter how much I do it’s never going to be enough. There is so much work that is needed to make this a legitimate website. This work could go on forever, and I kind of hope it does, but I have only had 3 weeks, and I only have a week to go.

Most of my classmates are in larger groups. I’m doing this by myself because I wanted this project to demonstrate all the potential that I have, whatever that might be, whatever I could possibly get done with regard to styling and HTML and Javascript and the Backbone framework and the Parse database back end.

But I know no matter how hard I work–I could work 24 hours a day–the design is going to fall short because I don’t know enough about awesome design and don’t have time to implement an awesome design. Integrating with api’s is going to fall short because there’s simply no time to do awesome things with them. The amount of information stored in the database is going to be limited simply because there isn’t time to build out an extensive data model. The CSS isn’t going to be extraordinary because I just don’t have the experience to make it as elegant as I would like.

I should define a scope of what to deliver at a minimum, and, I have, to a degree. However, it’s really difficult because I want this to be a fully functioning app. I don’t want this to be merely a demonstration where I can fake half of it, but rather a demonstration of something very real and functional that was created from nothing.

I am feeling enormous pressure to deliver something that is a fully functioning, particularly because the large groups will be delivering essentially complete web sites that are going to be functional in the real world. I put all of this pressure on myself because I simply don’t know what’s enough, at what point is it okay to say I will work on making this better later and that it does not have to do everything right now.

I know that no matter what I get done, it may not be apparent just how much effort I put into this. But no matter how much work I put into it, if you compare it to an established website by a very experienced developer it’s going to pale in comparison.

[Saturday, early AM] And my thoughts have pretty much been ditto early Thursday morning, early Friday morning, and right now.

I have been told the past few days to focus on design, which has just amped up the pressure, because, frankly, I didn’t spent nine weeks in the program to learn how to be a better designer. I always value good design, I cringe at bad design, and I feel pained when my own design is inadequate. But I came to the program to code–to learn everything I could about building front end applications with Javascript, and I wish that could be the focus of this final project. Instead, I find myself spending time on making buttons looks better. Why?

You could tell me to stop putting so much pressure on myself, but the audience for this five minute presentation is a group of local employers who are looking to hire developers. And I don’t expect to be employed by next Friday, so presenting my best self is advisable.

Out to get some work done. Thought a wrist rest would be a good idea. First-world problems. The Hallmark store (which is going out of business…near Durham’s South Square) could probably help me out. Then again, maybe this is just a sign that I don’t need this wrist rest,

Blog another picture five minutes later, because you are not ashamed of your dogs’ lady parts and like this new picture and are too lazy to swap out the picture in the last post. Or just don’t care that it’s essentiality a duplicate post. 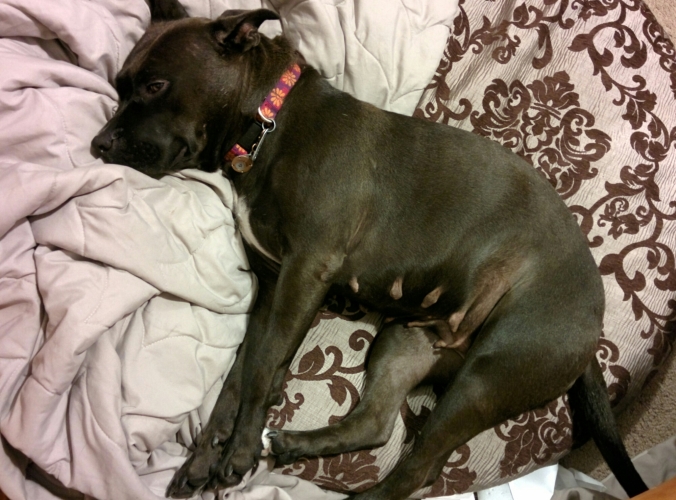